The Macrocilix maia is a moth that can be found throughout Asia. Its wingspan averages about 37 to 45 mm, or roughly 1.5-1.8 in. in length.

What makes this moth unique is its method of camouflage.  Many insects mimic their surroundings, whether they disguise themselves as sticks, leaves, bark, or other patterns. But the Macrocilix maia actually portrays other insects to disguise itself.

On its back it shows what appears to be two flies feasting on bird droppings. It is reported that the moth smells like bird droppings too. This is one of the most unique forms of mimicry that has been observed in insects! No other insect actually has a picture of another insect on it. 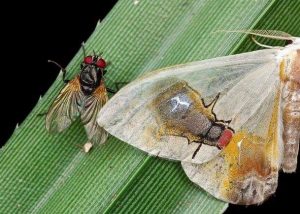 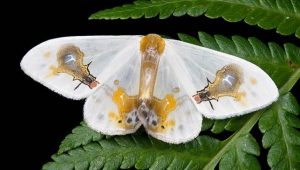