Most people are familiar with the seahorse, which itself is a very strange creature. Even stranger is its relative, the pipefish.

Their faces look similar to those of seahorses, but they have long, thin bodies and snouts that look like pipes.  That is how they got their name. 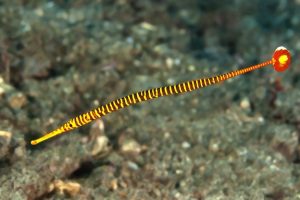 Their skinny bodies are protected by plating which functions like armor to protect them from danger. Due to the odd shape of their bodies, they can sometimes have trouble swimming. They do have a dorsal fin to help them move, but generally are not very active unless they are searching for food. They like to eat small crustaceans, shrimp, and plankton; they are only able to eat small food since they have such narrow snouts.

Pipefish can be found all over the world, and there are roughly 200 known subspecies of them. They can be found in both ocean and freshwater, tending to live near the shore in sea grass or corals.

Here is a video to learn about both pipefish and seahorses: