Leptodactylus pentadactylus, also called the Smokey Jungle Frog, is a very large species of frog that lives in South America. They can grow 7 inches in length, which is huge for a frog! 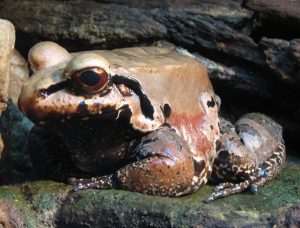 These frogs are nocturnal, meaning they come out at night, and terrestrial, meaning they prefer to live on land as opposed to water. This is an important distinction for amphibians, since some prefer water and others prefer land. During the day, they hide in burrows, logs, or under houses- anywhere they can find shade.

Their habitat is usually lowland, and they tend to live in tropical forests. Their tadpoles can be found anywhere there is water- streams, ponds, and swamps. They can even live in foam nests made by their parents.

Here is a parent frog in a foam nest made for the tadpoles: 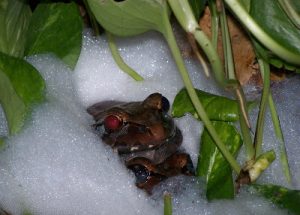 They evade predators by jumping very fast and far away. They also scream very loudly if a predator tries to grab them. They are so large that they can eat almost anything, even birds, snakes, and other frogs! Shockingly, they have also been known to eat scorpions, something few other animals do. Even Leptodactylus pentadactylus tadpoles are carnivorous, and have been known to cannibalize their own species! However, this species of frogs is omnivorous, meaning they eat both plant and animal matter. The adult frogs will eat most kinds of available plants, and the tadpoles will feast on algae.

Another crazy fact about these frogs is how tough their tadpoles are. While you would usually think a tadpole has to stay in the water to survive, Smokey Jungle Frog tadpoles can survive up to 156 hours without water! That’s almost a whole week.

Watch this video to see what they sound like: